A day in the life: Critical access ER RN. 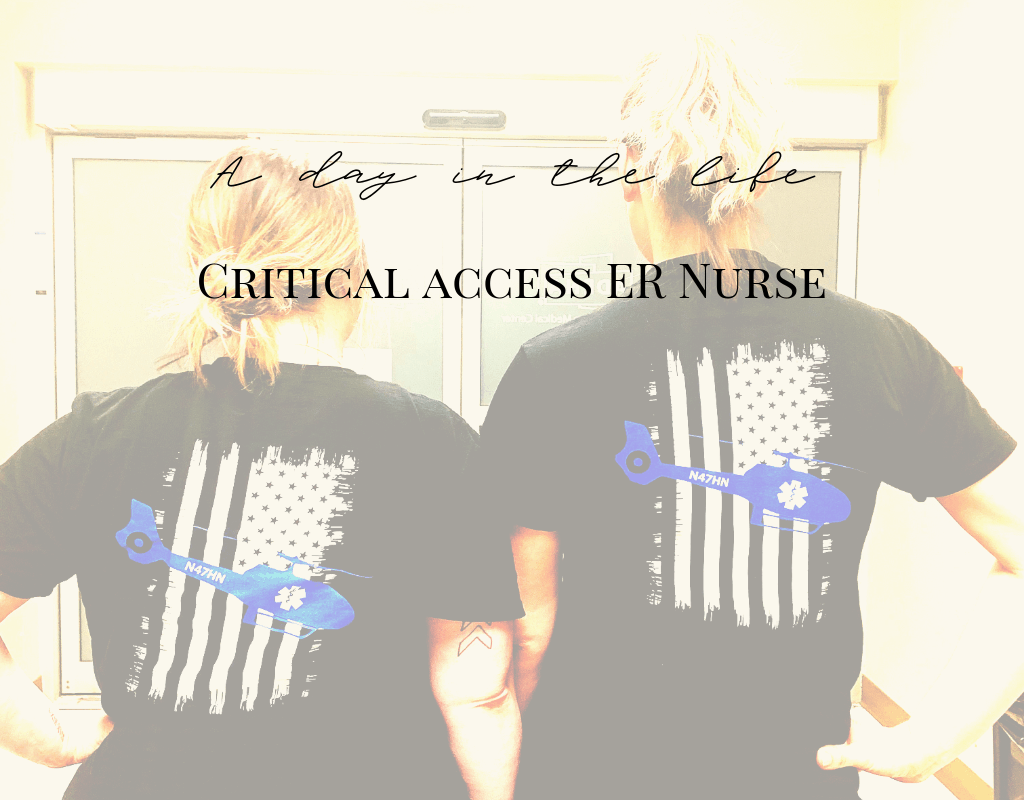 I would love it if you shared this with a friend!

*This post contains affiliate links which means if you click and buy, I may make a commission at no additional cost to you. See my full disclaimer policy for full details

Ever since Senator Maureen Walsh came out with her statement about rural critical access ER nurses playing cards because they didn’t have anything else to do, I felt compelled to share with you what it can really be like to be a critical access ER RN.

So come, take a look inside what it is like to be us…Put yourself in our shoes.

As soon as you clock in, you’re met with an ER full of people. Just as you grab a computer a patient is brought back to a room for severe difficulty in breathing so you go in to help place a line and get meds ASAP. In the meantime, dayshift leaves without giving report because well they’re tired and ready to leave….can you blame them?

A squad comes rolling in with your next patient, a fall from home who likes to talk. The patient never answers questions directly so triaging takes a month of Sundays, while discharges are piling up, and the ER physician is impatiently waiting for you to get these people out of here.

Next, you get yelled at by an angry girlfriend because you did not pinpoint the exact reason her boyfriend was having chest pain and she threatens that if something happens to him because you discharged him she is going to sue you because that’s what everyone says nowadays

While you are tending to the next patient who comes in by ambulance, you have a child in triage because they were bitten by a dog and need immediate attention, and one of your patients just walked out with their IV in so now you have to take time out of your night to call the police and give them a report.

By now its midnight and half your shift is over and you haven’t even seen the inside of the bathroom, much less eaten a bite of food. You’ve been so busy that you’re not even sure you need to pee, then it hits you, yep you need to pee. But then the squad calls at the end of the driveway, they have an unresponsive they’re bringing you, CPR in progress and you now don’t have time to pee.

You and the one other nurse on your shift have seconds to tend to any needs your other patients may have so you can immediately start taking care of the patient rolling in by ambulance not breathing. The patient rolls in and you hook them up, establish an IV, push drugs, and say a little prayer because you know this is someones loved one. While doing CPR, your patient in the bed next door starts hollering they need something for pain NOW! They yell that they are a patient too and want attention now.

So here it has been 30 minutes of CPR and the doctor calls it, time of death 0104. You want to feel some sort of emotion but you can’t because it’s right back to the grind, so you suppress it. Then finally a miracle, you get the ER cleared out, your last patient is walking out the door.

Then the phone rings….

The person on the other end tells you they’re bringing their spouse in because they’re not acting right. Sure enough within minutes of them coming in a stroke alert is called, then a chest pain walks in, an A-Fib with RVR comes in, a possible DVT, and a fall, literally a few minutes apart. There is no one to come help, we are it. Lines are being placed, ECGs ran, and drugs pushed all while a neurologist calls and says give tPA and get that stroke patient here now. Yes hello, MedFlight? Are you flying tonight??

Crazy huh? But that’s not it…

Now we get a call from a squad saying they’re bringing us a psych patient, one with a violent history, one who has attacked our staff before. We have one security guard and he doesn’t even get mace so….yeah. The patient arrives and is obviously hyped, we call for an immediate transfer to a psych facility but guess what, squads don’t want to take him without police presence but they can’t cross the county lines. So here we are, in quite the pickle…

This is not every night, but every one of these situations has happened. I have been yelled at, cussed at, grabbed, and spit at.

I have been called at home to ask why I didn’t click a box on restraints assessments but never called to say “Hey, good job!” I have been told to go back into work and fix minor documentation problems.

I have also had the pleasure of holding a patients hand as they left this world. I have been hugged by spouses and children for taking exceptional care of their loved ones, and I have worked with some of the most amazing doctors and nurses.

Is being a critical access ER RN trying and difficult at times? Absolutely. Would I trade it for anything in the world? Probably not.

Do you work in the ER? Make sure you leave a comment below and let me know what you think!

5 thoughts on “A day in the life: Critical access ER RN.”

This site uses Akismet to reduce spam. Learn how your comment data is processed.

Searching is in progress